One request I’ve had is to talk a bit more about how Shy Gal Emoji can be used in dronekink scenarios. The Shy Gal emoji are designed to present zero eye or mouth expression, resulting in the cues of many emotions being occluded. For example: A “standard” feelings scale using Microsoft Segoe Emoji vs Shy Gal Emoji.

Of course, a Shy Gal is still capable of producing tears, which their eye holes allow to drip out. However, because the source of such emoting is occluded, all that can be seen is the presence of the tears themselves.

Similarly, a Shy Gal is capable of sweating, and whether that be from nervousness or excitement is unapparent. 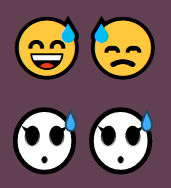 There are several potential ways the font could be used for passive drone play. Currently, all of them require at least medium amount of technical proficiency.

A hive queen installs the Shy Gal Emoji Font on her and her drones’ computers. When sending emails to her, they write them as HTML emails and set their font to the Shy Gal Emoji font. They then proceed to insert emoji as usual, but all of their expressions will be occluded by the font.

Setup a custom fontconfig that overrides other emoji font as the default. Then configure an emoji picker (such as rofi-emoji) to use a more emotive emoji font (such as Noto Emoji). Then when selecting your emoji, you will be able to pick your emoji with full accuracy, but will see your emoji being occluded as you input them.

A cute and kinky emoji font featuring a Shy Gal